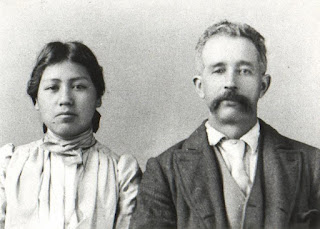 He probably left Pico on an American whaling ship in 1846. It was customary in those days to work on whaling ships for about two years before being dropped off in America, usually at New Bedford. The 1848 California gold rush attracted many Portuguese from the American east coast and also caused whaling crews to desert their ships while anchored in San Francisco. In 1850, J. S. Silvey is listed at Clark’s Point, San Francisco as a pilot on the Sacramento and San Joaquin rivers.
It is likely he arrived in B.C. around 1858 to 1860 with four or five other Portuguese men in search of gold. After a scare with Indians in the Cariboo, they returned down the Fraser River on their way to Victoria. At Musqueam they met some friendly Indians who gave them shelter. They were welcomed onto shore by Grand Chief Kiapilano, Joe’s future "grandfather in-law", who blessed the marriage.
Soon after Joe married Khaltinaht, Kiapilano’s granddaughter. Many years later, Joe described his first wife as a, “pretty girl with dark eyes, and hair down to her middle; large deep, soft eyes.” After honeymooning in Point Roberts, where Joe may have previously lived, he built a house at Coal Harbour near Brockton Point in Stanley Park. There, Elizabeth was born around 1864/67, the first child of European parentage born in Vancouver.
In 1867 Joe became the first Portuguese in Canada to receive British Citizenship. The following year he requested the Colonial government to lease him 20 acres of beachfront property in Stanley Park but was refused. However, he purchased lot No. 7  in Gastown  after  the surveying of the town site of Granville in 1870. Gassy Jack opened the Globe Saloon and Joe opened the Hole in the Wall across the street from Gregory Fernandez’s store. Gastown, was two blocks long. Vancouver was in its infancy.
Disaster struck Joe’s family soon after their second child was born in 1871. His wife Khaltinaht caught a cold in her back and died. She was buried with her people at Musqueam. Devastated, Joe sold his Saloon to some hand loggers and retreated to his home in Stanley Park. He fished in a sloop he had built in Stanley Park, the “Morning Star,” the first European built boat in Vancouver. It was probably while fishing in Howe Sound near Eqmont that Joe met Kwaham Kwatleematt, a Sechelt Indian known as Lucy. She had ten children before Joe died in 1902.
As pressure increased on the settlement of Portuguese, Scots, and Indians living in Stanley Park, (by now a federal military reserve), Joe decided to leave. He left his house to Joseph Gonsalves (Portuguese Joe No. 3) and in 1881 pre-empted 160 acres on Reid Island, just off the northern tip of Galiano Island. Later, his son Domingo acquired the rest of the island. Joe built a large house and a store. He continued to fish and farm. He planted an apple orchard. Later a school was built for the growing families. In 1901, the year before he died, he described himself as a fisherman who had earned $600 the previous year, a considerable sum in those days. He was generous with the fish he caught, helping many people who needed food to survive.
On January 17, 1902 Joe died on Reid Island where he and his son Domingo are buried. Today, there are over 500 descendants of Joe Silvey in B.C. who are very proud of their Portuguese and Aboriginal ancestry.

Lucy "Kwatleematt" Silvey (later Mrs. Joe Watson) circa 1930
Her name was Kwatleematt and when she married her husband Joseph Silvey her name white name became Lucy.
Lucy was born in a village called Tsonei.  That village stood at the junction of Princess Royal Reach and Prince of Wales Reach.
See the map below for Lucy Silvey's place of birth and home territory.
http://www.princesslouisa.bc.ca/here.html

British Columbia is known for the colourful pioneers who helped build and shape the character of this weird but wonderful province. And few were as colourful as Portuguese Joe Silvey - a saloon keeper, whaler and pioneer of seine fishing in British Columbia.


Born on Pico Island, of Portugal's Azores Islands, sometime between 1830 and 1840, Joseph Silvey began whaling when he was just 12 years old. In 1860, when Silvey came to the BC coast on a whaling schooner, he decided to jump ship to try his hand at gold-mining.


From harpooning whales in small open rowboats, to serving up liquor to rambunctious millworkers, to being the first man to have a seine license in BC, Silvey was the Renaissance man of his generation. His friends were many, and included saloon keeper Gassy Jack Deighton for whom Vancouver's Gastown is named, his prestigious grandfather-in-law Chief Kiapilano (of the Capilano Nation) and a remittance man who liked to wear either his wife's clothes or none at all.


Although Portuguese Joe and his family prospered - he had 11 children with two wives and his many descendants still populate the BC coast - they also had their share of grief. Joe's first wife Khaltinaht died after a few short years of marriage; his eldest child Elizabeth was later kidnapped and forced to marry against her will; and his sixth child John was murdered in a rowboat while on his way to buy clams.


Historian Jean Barman brings to life the story of Portuguese Joe - the romance, the tragedy, and the adventure - with skill, piecing together interviews with Silvey's descendants, archival records and historical photographs to build an intriguing and entertaining portrait of Joseph Silvey, his family, and the time and place in which he lived.
From City Archives-Major Matthews
(Early Vancouver
Volume Three
By: Major J.S. Matthews, V.D.
2011 Edition (Originally Published 1935)
Narrative of Pioneers of Vancouver, BC Collected During 1933-1934.
Supplemental to Volumes One and Two collected in 1931-1932)

Antony Silvey, Reid Island.
(See Early Vancouver, Vol. 2 and Vol. 3—in preparation.)
HISTORICAL.
“The marriage and dates can be found at St. Mary’s Mission, Mission, B.C., in Rev. Father Fokkia’s
Books. My father, Joseph Silvey, came here from the Californian gold excitement to take in the Cariboo.
When he came back, he settled down at Brockton Point, Burrard Inlet. That is where I and my brother
Domingo were born; that was 1874 and 1877. Mrs. J. Walker and Mrs. S. Anderson were half-sisters to
us. They have over sixty grandchildren. Vancouver was called Gastown at that time.” – Mrs. M.A. Buss, a
daughter of Mrs. Watson, who died in late July or early August, 1934.
PORTUGUESE JOE.
Excerpt from a letter of Theo. Bryant, Ladysmith, son of Rev. Cornelius Bryant of Granville, 28 September
1934.
“Mrs. Jos. Silvey passed away only a few weeks ago in the person of Mrs. Jos. Watson, leaving Jos.
Silvey at Sechelt, Domingo and Antonio at Reid Island, near Portier Pass, Henry, don’t know residence,
and Mrs. Jas. Walker living in Vancouver with a big family. The Silveys of Sechelt are of Reid Island
stock.”
15 OCTOBER 1934 – GENEALOGY OF MRS. MARY ADLAID BASS.
Residence: Egmont, B.C.
Place and date of birth: Gastown, Vancouver, B.C., 24 May 1877.
“I am the daughter of Portuguese Joe Silvey and Lucy Silvey.” (Watson.) “These are four of my children;
the oldest is dead:
“Dexter Sidney Brown, born at Frake, B.C., 7 October 1902.
“Ida Brown, born at Lund, B.C., 1905.
“Kenny Brown, Mission City, B.C., 7 October 1907.
“Arthur G. Buss, born at Chemainus, B.C., 25 December 1914.”
PERSONAL SERVICES.
“My father, Portuguese Joe Silvey, used to have gill nets and rent them out to the Indians and every
Indian on the coast knew him. That’s how they all came to call him ‘Portuguese Joe.’ He had a little
trading store and traded with Indians. That Gregorio Fernandez was my godfather.
“My oldest daughter, Mrs. Laura Harris, was killed on Hastings Street in 1914, and my oldest son was
drowned with my brother, Manuel Silvey, in the Narrows at Brockton Point; they were run down by the tug
Magoon on 16
th
December 1916. Two of my other daughters died in Alberta.
“One of Mrs. S. Anderson’s sons is here with us. Mrs. Anderson and Mrs. Walker are our half-sisters, but
Portuguese Joe Silvey’s oldest daughters.”
HISTORICAL.
“I am the Mary A. Silvey that you refer to and the daughter of Lucy Silvey Watson and Portuguese Joe
Silvey, my father. My mother was a native or Indian, if you wish to call her that. My father was married
when he first came to this country, to Mrs. Walker’s and Mrs. S. Anderson’s mother, who died in Gastown
in 1865. Then Father married my mother so as to raise the two girls, Elizabeth and Josephine, now Mrs.
J. Walker and Mrs. Steven Anderson. Mrs. Walker is now Mrs. Harry Armstrong; she lives on Georgia
Street, Vancouver, B.C.—I don’t know the number—and Mrs. Anderson is dead. Father had a store in
Gastown and when the C.P.R. was surveying the road he had some dispute about moving his house
back; the water used to be up close to where W.H. Malkin’s Building now stands. Father went in with
Ladner, canning salmon, and he was the Portuguese Joe that the Indians speak of. So please get this
129


“Then the next morning after Josephine was born they brought me home, Mrs. Trim and Mrs. Smith (I’ve
got a good memory, haven’t I?) on Bowen Island, and the little baby, my sister Josephine, was on a
pillow.”
Major Matthews: Harry Trim came down from the Cariboo, after he got through with mining, in 1868.
Mrs. Walker: “That’s what my father, Joe Silvey, did but he came down before he got very far up the river
because the Indians chased him away.”
Posted by elopes at 9:55 PM

The first naturalized Luso-Canadian (1867). He was from Pico island in the Azores. 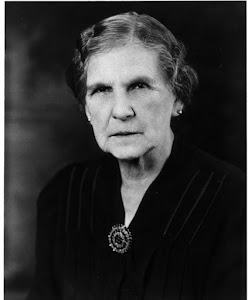 The first child born in Vancouver of European heritage. Her maternal grandfather was Grand Chief Kiapilano.